This year’s annual Scholar’s Lecture took place on Wednesday, November 29, 2017. The event gives the Mason community a chance to see some of the amazing work that is being done here on campus by Women and Gender Studies faculty.

This year’s featured scholar was Dr. Rachel Lewis, associate professor of Women and Gender Studies and graduate program director. Her lecture was entitled "Queer Intimacies: Black Lesbian Visual Activism in Contemporary South Africa". She shared the work of several visual artists, including filmmakers and photographers, and gave well-informed analyses of their work. Her talk offered great intersectional and international perspectives on many issues that still plague representations of Queer Black Women.

Unique to this year’s lecture, two outstanding graduate student projects were recognized and showcased. Valencia K. Long shared her film, The Transformation, which gave viewers insight into what makes Women and Gender Studies at Mason such a distinctive community and how the support that is offered by its members facilitates powerful growth. Valencia’s film was featured at last year’s Women and Gender Studies Conference. The other project that was highlighted was a play written and directed by Carol Campbell, entitled The Lesbian Wannabe, which has been featured both in the community and at last year’s Women and Gender Studies Conference as well. Carol and a few Mason students acted out some scenes from the play, which featured a comedic view of the highly inappropriate trials that some LGBTQ asylum-seekers face during their asylum interviews. 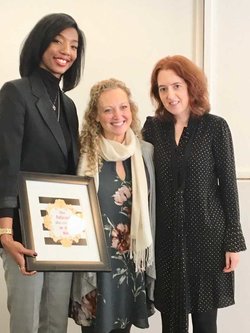 After the presentations, there was time for questions, mixing and mingling over amazing food.

Valencia graduated with a Masters of Arts in Interdisciplinary Studies with a concentration in Women and Gender Studies in May 2017. You can view her film, The Transformation, here.

Carol will be graduating with her Masters of Arts in Interdisciplinary Studies with a concentration in Women and Gender Studies this December.