On October 12, 2017, Fall for the Book, Women and Gender Studies, African/African American Studies, and LGBTQ Resources joined hands together in bringing Janet Mock, a trans activist and New York Times best-selling author of Redefining Realness, to speak about her newly published memoir, Surpassing Certainty: What My Twenties Taught Me. The interview took place at the Harris Theater as interviewer Dr. Wendi N. Manuel-Scott conversed with Mock on stage. The nature of the event was extremely intimate and friendly.

Mock discussed many points in her book but definitely seemed to stress the topic of intersectionality. The concept of her identity being reduced to her being trans was definitely an issue she sought needed to be discussed. She explained that she is wholeheartedly a Black trans woman, along with many other identities, and explains that these intersections are dependent on one another. To speak on one is to speak on her identity entirely. Her storytelling enticed the audience as she disclosed the many micro-aggressions she received in her life.

However, these heavy topics weren’t the only things discussed. Mock’s playful and comical personality definitely captivated the crowd. The audience snapped passionately as she continued to name music inspirations that happened to be black women. Albums like SZA’s CTRL and Solange’s A Seat at the Table were name dropped along with many other powerful black women pop artists. Mock confessed that the inspiration behind her name Janet came from Janet Jackson, a huge icon of hers.

Wrapping up the discussion, Dr. Manuel-Scott asked Mock what her take on love was. Mock confirmed that if there was something she learned about love in the past, it was, in her own words “I no longer am lucky to be loved, I deserve to be loved”, a quote that was definitely striking to many. Self-love is certainly a goal everyone strives to get to, but hearing that line of words reminded the audience the significance of it all. 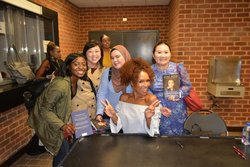 On top of it all, Mock was presented with the annual Sojourner Truth Lecture Award in recognition of her efforts towards social justice by Director of Women and Gender Studies, Dr. Angie Hattery and former African/African American Studies Director, Dr. Wendi N. Manuel-Scott.

Ultimately, Mock held one of the best interactive campus events this year and continued to sign books afterward while taking pictures and selfies with many of her loving fans. The interview’s adaptable and humorous nature appealed to the audience entirely.

It’s safe to say Fall for the Book, Women and Gender Studies and all the co-sponsors scored a great one with Janet Mock! 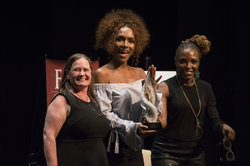